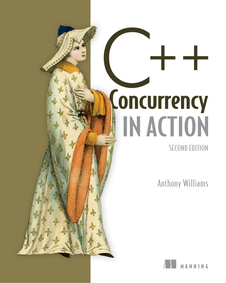 C++ Concurrency in Action (second edition, published 2019 by Manning Publications) is the definitive reference and guide to writing multithreaded code with Standard C++. It is suitable for all levels of C++ programmers, including those who have never previously written any multithreaded code. This book will show you how to write robust multithreaded applications in C++ while avoiding common pitfalls.

It's not just the best current treatment of C++11's threading facilities ... it's likely to remain the best for some time to come.Scott Meyers

This book should be on every C++ programmer's desk. It's clear, concise, and valuable.Rob Green, Bowling Green State University

The C++17 standard provides extensive support for writing multithreaded code to take advantage of these multicore and multiprocessor systems. C++ Concurrency in Action explains how these facilities work, and how to use them to best effect.

This book provides a tutorial covering the use of the library facilities introduced in the last three C++ standards. It covers everything from the basics such as std::thread, std::future and std::condition_variable, to an in-depth description of the new memory model and std::atomic classes for low level synchronization and the new C++17 parallel algorithms. In later chapters, the book then goes on to cover the design of multithreaded code, including lock-free data structures and thread pools. Finally, there is a chapter on testing and debugging multithreaded applications.

It doesn't stop there though: the appendices include a brief overview of the some of the C++ language features either used by the multithreading facilties, or commonly used in conjunction with them, such as variadic templates, lambda functions and rvalue references, as well as a 150 page reference covering every class and function in the C++ Standard Thread Library. The book also covers the additional facilities from the Concurrency TS that aren't yet part of the main C++ standard.

Additional material in the second edition

In addition to all the material from the first edition, the second edition (published in 2019) includes full coverage of the library changes from C++14 and C++17:

Plus, full coverage of the library extensions from the concurrency TS: